The poetry of laughter…

Today I am sharing one of my simple poems, “Laughter.” I wanted to describe as many kinds of laughter as I could. If you can think of other kinds of laughter, or have any critiques on the poem, please let me know in the comments below!

What do you think is the most interesting kind of or thing about laughter? Did I get all (if not most) of the kinds of laughter you know of?

Thank you for reading! Have an awesome week and God bless!

Today I am sharing one of my own poems, “When Sorrows Come”. Enjoy!

I always liked the imagery that inspired this poem: that clouds are the sorrow that block out the sun, but all you have to do is fly above the clouds and enter a world of fluffy white clouds and bright, clear sunshine. It doesn’t claim that the clouds aren’t there; rather, it sees the beauty in and above the clouds, and recognizes the eternal presence of the sun.

What do you think? Do you have any critiques or tips for the poem? What was your favorite part (if you had one)?

Have a great week and God bless!

“Mechanical Heart” by Anne Bree Caitlin. What is this poem about?

Today I am sharing one of my own poems, “Mechanical Heart”. I bet you can guess what this poem is about! Share your “guess” in the comments below. 😉

What do you think this poem is about? Did you like it? Do you have any critiques or tips for this poem? Comment below! 🙂

Have a great week! Keep on writing!

“The Road Not Taken” by Robert Frost

Here is another one of my favorite poems. It is, as you can tell by the title, “The Road Not Taken”, by Robert Frost. Enjoy!

“The Idea” by Anne B. Caitlin

The words mingled in her mind
Swirling, whirling, a golden find.
She raced up to her room
Praying to find some paper soon
Grasping, clasping the memory close
Before the lovely lines bid adios.
In a swirl in a frenzy scratched the feather
Upon the little tree bound in leather,
Blocking all sound ‘cept the supper chime.
She did not dare to dine
Whilst remained the revelation.

Insistent rang the bell, still did she not come.
Fought she fiercely, struggled strongly,
Wrestling the idea’s resistance singly.
A slip, a dash, a tackle down–
‘Till at last the battle was done.
Heart beating, heavy breathing,
Slumping to her seat, the wing-
Feather flying with the weary wind.
Her feat was recorded and
The deed by dinner rewarded.
Her mind was done, but then was fed.

While this was one of my more… old-fashioned-words style poems, I loved “the idea” of this poem. This describes a lot of writers’ experience with ideas. The frantic search for paper, pen, phone, computer, or typewriter before they forget the idea. The suddenness of the inspiration–it doesn’t wait for a good time to appear. It just pops into your head, demanding immediate attention and insisting to be written down at once.

What do you think? What was your favorite/least favorite line(s)? What do you like to write your ideas down on?

Hope you’re having a great week!

“The Wind and the Oak” poem by Anne B. Caitlin

Today I am sharing one of my own favorite created poems. Let me know what you think of it in the comments below!

Oak stood upon a hilly ridge.
Wind whirled and whistled
And all bowed before his will.
He swept Oak’s sorrow from her gaze
And blew her burdens away.
She gazed in awe at the glorious
Swaying, worshipping grass
Which hummed and fluted
Praise to Wind’s wonderful power.


Wind whispered and wondered
At Oak’s thoughtful stand.
“What are you thinking?” Asked he.
Slowly responded she.


“I watch motion’s mysteries,
I ponder the path of the breeze.
What wisdom does Wind contain?
From whence he came,
No one has been informed.
To where he goes,
No one knows.
Can you tell me please,
Who your Maker be?”


“He is the Master of the sea,
The Word, the Life, the Light be He.
He directs my path,
All knowledge He hath.
I know not where I go,
Except that where He says, there I blow.”

My favorite line(s) out of the whole poem has to be, “I know not where I go, except that where He says, there I blow.” Too often in our lives are we blind, uncertain, and scared of the future–we have no idea how it will go, or what will happen. We can only live on a day-by-day basis. But the pressure’s not on us to know exactly what we’re going to do and where we’re going to go. All we need to do is “trust and obey” God every moment of our lives. He has the plan and knows what will happen.

Thanks for reading! What was your favorite (& least favorite) line(s)–if any? Any critiques? Comment below!

A poem by me and a blog update! 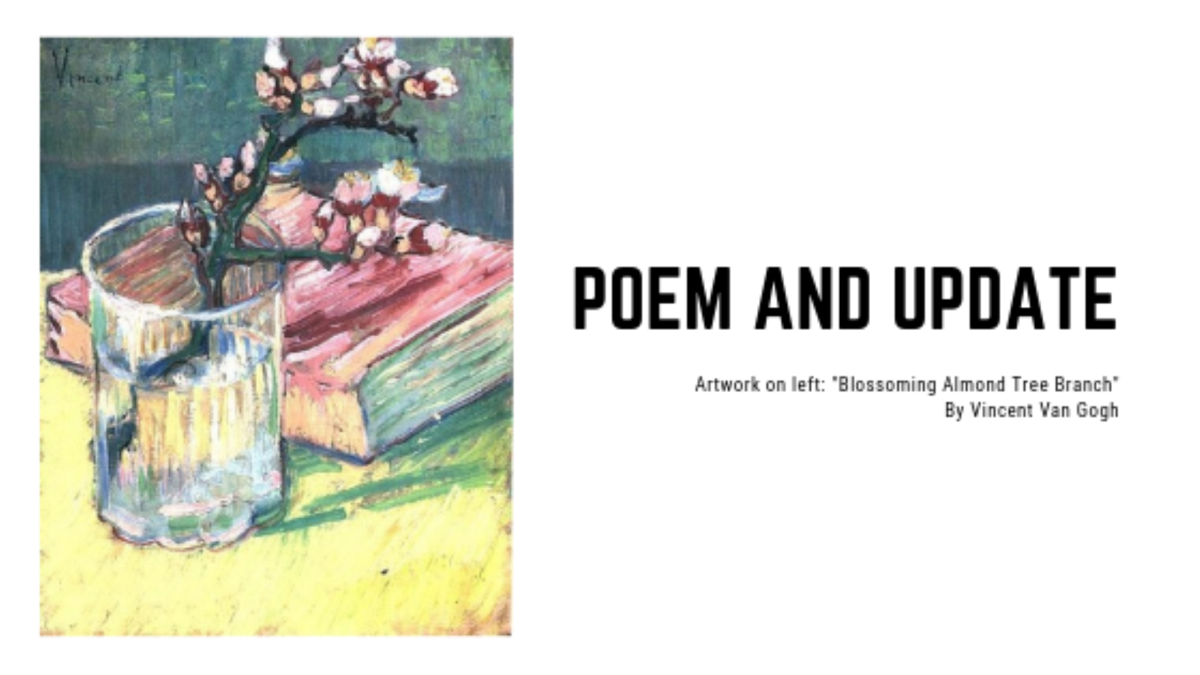 As you know, I post rather irregularly. I struggle to find a good posting frequency that works with my busy schedule. So now I will be trying to post at least once, if not twice a month. Every week (or every other week), I will be posting a poem–either of my own or by someone else. Then, once a month, I will post an update on my writing/reading. Sound like a good plan? Let me know what you think below!

This poem came out in a kind of song form, rather than just a poem. I hope you enjoyed it! Let me know what you think of it in the comments below!

Let me know if you have any suggestions for posts and/or post frequency! What did you think of the poem? Did you see any ways I could improve it? Comment below!